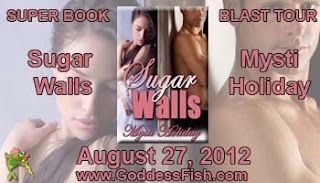 When Emilie is dumped by her boyfriend, best friend Jack Voss offers a shoulder and a place to live--the other side of his duplex. He’s always there, fixing her problems, her car, her sink. Emilie doesn’t know what she’d do without him, or with the feelings she’s having for him. His shoulder doesn’t just offer comfort anymore; his touch is a turn-on. Their shared wall is the only thing keeping them from sharing a bedroom—and fanning the flames might risk breaking something that Jack can’t fix.

Emilie hadn’t lied about the leak in her pipes.  Just like she hadn’t broken her dishwasher, or the leg off her couch, or the alternator in her car on purpose. But, to be honest, it was almost a relief when those things happened, because they gave her an excuse to see Jack.

She’d called him first thing this morning when running water for her coffee had resulted in puddles beneath the sink. He’d come over the first chance he’d had and now he was on his hands and knees on the linoleum looking at the pipe that oozed moisture, oblivious to the woman behind him who was also soaking wet, albeit for an entirely different reason.

His ass looked good enough to take a big bite out of. Emilie couldn’t help herself; it was right there, sticking out from under her kitchen sink, and she had to clench her hands into tight fists to keep from grabbing it. Still, that didn’t keep her mind from wandering, and when one of his hands reached out for a wrench, she pictured it on her, cupping her breasts, thumbs circling the rosy buds. Instantly her nipples puckered, as tightly clenched as her hands, and her crotch dampened even more.

Mysti Holiday is the pseudonym of a very busy SAHM who dreams of warm climes and hot bodies.  Most people know she writes, but not what she writes about:  sexy men and the wanton women who love them. She's married to a wonderful man who happily sacrifices himself for research, and she spends most of her days dreaming of interesting and unusual situations in which to place her characters.  But most of all, she's a sucker for a happy ending.

Special Announcement - The author will be giving away a $10 Amazon gift card to one random comment.
Posted by Vivienne Diane Neal at 1:00 AM

Thank you for hosting me today!

I love the premise of the friends to lovers story. So much can lead to that first encounter. I need to get this one for sure.
mel
bournmelissa at hotmail dot com