Thank you for stopping by! Please explore everything this Blog has to offer, then jog on over to Author’s Box created by Carol Denbow who is the author of six books, most on book writing, publishing and marketing. On this day only, she will be offering a 50% discount on ALL of her books. If you would like to visit a different Blog in the jog, go to http://blogjogday.blogspot.com/ 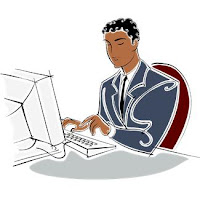 Get a 20% discount off Shades of Deception, a collection of ten fictional short stories centering on diverse men and women who in their speedy search for love, romance and bliss, become the targets and victims of deceit, betrayal, fraud, revenge and scandal. Each chapter tells a story as to how ordinary citizens who are sophisticated, successful and financially smart fall prey to insightful predators that use love, romance, lust and money as embellishments to destroy lives. Offer will expire on December 31, 2010.
Read what one person had to say about Shades of Deception: "Really a fantastic novel. A mirror to the real world. I hope it can be translated into Chinese."
By Achates on 12/13/09
Excerpt from The Woman Behind the Red Curtains, one of ten short stories from Shades of Deception:


People in the neighborhood were fascinated with the house on the corner, which had been unoccupied for three years. The property, with its strange past and lingering questions, had neighbors speculating as to what really happened to the couple who once lived there. Rumor had it that Mr. and Mrs. Awa were celebrating their twenty-fifth wedding anniversary on a hot summer night. One hundred guests attended the gala, and one of the invitees was an alluring young woman. Her stunning features captivated most of the men at the party, and Mr. Awa had fallen for the enticement. She was twenty-three; he was fifty. They started to talk, and before anyone knew it, the two snuck off to the basement and went at it like a heifer and a bull in heated passion. She had such a grip on him that the lovemaking lasted for almost two hours. He never experienced this type of fulfillment, not even with his wife, who never missed him because she was busy attending to their guests. Being in a state of erotic bliss, he was ready to leave his spouse and live merrily ever after with the young female. Almost losing track of time, the husband rushed back to his wife and company. Ten minutes later, the young woman followed like a silkworm coming out of her cocoon. When the party was over, the husband announced to his wife that he no longer loved her, wanted a divorce and was gone the next day. One week later, his wife vanished. It was a mystery as to where the couple went. Many surmised that the wife might have done away with her husband, or he might have run off with his young lover. Since the couple only lived in the house for five years and kept to themselves, neighbors never got to know them. The duo would never speak to anyone and would spend weekends at Martha’s Vineyard, where most of their friends lived. The Awas were a strange match in heaven, to say the least. People would refer to them as the creepy crawler twosome, because they would sneak out of their house to avoid running into the neighbors.


The one hundred year old Victorian style single-family house was located in Central Brooklyn, New York, a thriving village made up of professionals, artists, retirees and business owners. Built in 1901, the 4,090 square feet three-story property had 9 furnished bedrooms, 2.5 baths, 2 total full baths, 1 total half bath, and a finished basement. There were carpet, marble, and linoleum floors, a spacious kitchen with a refrigerator and stove, an open dining area, and an airy living room where an imported crystal chandelier hanged. What made the home even more distinctive were its hardwood floors, decorative stairs, multi-colored walls, patterned ceilings and its steep roofing. Throughout the house were Victorian and modern furnishings, African and Native-American paintings, and exquisitely handcrafted treasures from every corner of the world. It was never quite clear who owned the house. The neighbors assumed the couple was the rightful title-holders, but when they disappeared, several people showed an interest in buying the property, but when individuals did a title search, there were too many roadblocks. Therefore, interested parties never proceeded with the purchase. In 2003, the house was valued at $500K. Three years later, the asking price would probably be close to $700K. Nevertheless, as time went by, folks lost interest in the house and the odd couple, but soon that would all change. A storm was about to pass through, and if the community was lacking in new chitchat, they were about to be hit with the biggest scandal that would make a soap opera look like child’s play.
Links to Purchase Shades of Deception
Printed Version or PDF: http://www.lulu.com/commerce/index.php?fBuyContent=660882
E-book - http://www.smashwords.com/books/view/24236
About The Author
Vivienne Diane Neal gets her story ideas from observing people, places and things and watching true TV court cases. She has just completed her third book Malicious Acts, an anthology of five short stories that centers on people who will stop at nothing to get what they want. If it means disguising themselves as benevolent individuals and destroying lives along the way, they are up for the thrill. They will use romance, lust, greed and deceit as preludes to suck unsuspecting men and women out of their life’s savings. The release date for Malicious Acts is the winter of 2010.
Her fourth book, Wicked Intent, is a fictional short story about a successful businessman who is set to marry his fiancée of three years, but is sidetracked by a beautiful new arrival, who will brings lust, desire and eroticism into his life but will ultimately destroy his relationship with the one person who has always stood by him. The book is set to be released in the summer of 2011.
Posted by Vivienne Diane Neal at 12:00 AM No comments:

The Reinvention Summit is gathering a new tribe of storytellers: change-makers, marketers, entrepreneurs, and creatives who see storytelling as critical to their work and mission. There’s a star-studded line-up of 25+ speakers with diverse backgrounds to lead teleseminars, interviews, and panel discussions that relate to the future of storytelling as our world goes through reinvention. All sessions are recorded for playback. The online summit includes lots of social networking, collaboration, and crowd-sourcing for those who feel inspired to play. Entry-level pricing starts at just $11.11.
To learn more: visit http://www.reinventionsummit.com/
Posted by Vivienne Diane Neal at 12:00 AM No comments:

Telltale Signs of a Cheating Spouse by Miss Know It All

Whenever a spouse is cheating, that individual will always send out signals or may say something that might not mean very much at the time, especially if he or she is caught in a compromising situation. Because you believe your relationship is built on trust, you will give your mate the benefit of the doubt. Too often, the signs of cheating are so obvious that a bat could read between the lines, and the explanations given are so ludicrous that they defy logic. One would have to ask, “Does this person really think that I am stuck on stupid?” Yet, many will continue to ignore the ‘in your face’ warnings. Eventually, a spouse will have to face reality and ask, “Is there infidelity going on in our marriage?” Although unfaithfulness occurs on both sides, we are focusing mainly on cheating husbands who have used some of the most dumbfounded excuses to mask their betrayal:
“Honey, I am going fishing with my buddies this weekend.” Ordinarily that might not be a problem, but why would he choose to go fishing on the day of your birthday or worse on your wedding anniversary. Some individuals might say, “Give the guy a break; most men have a temporary lapse of memory when it comes to important dates.” However, if a woman never forgets, why would a man fail to remember such an important day?
You find condoms in the glove compartment of your husband’s car. You and your mate never use condoms. His explanation is that the condoms belong to his male friend, and he is just holding them as a favor. The question to ask, “Would a woman carry her friend’s diaphragm or cervical cap as an act of kindness.”
You find a pair of panties in the back seat of your husband’s car; he tells you they are your gift for Valentine’s Day. The problem is, the panties are a size 5, but you wear a size 16. In addition, nowhere on the label does it indicate that one size five fits all.
Your husband is served with child support papers and you never knew he had an offspring. His response is, “We were separated during that period, but you were still legally married.
You find a shoebox hidden in the basement. In that box are risqué photos of him posing nude with another woman. You confront him, and his response is, “That is not me baby.” You say, “It is you.” He says, “Who are you going to believe, me or your lying eyes?” When he makes that remark, he has a great big grin on his face.
It is late at night, and you wake up to noises coming from the living room. You go down stairs to check and catch your husband doing a horizontal dance with a strange woman. He looks up and says, “Honey, it is just a dream. Go back to sleep.”
* * * * * *
Have you heard of an unbelievable explanation given by a cheating spouse, when caught in a compromising position? If so, we would like to hear from you. Your name or email will never be published. Only your initials, city or country where you reside will be posted. Send details to hmcsromanceinternational@juno.com Sometime in the in the near future, we will post the results. All information submitted will become the exclusive property of HMCS and may be published in any media without any compensation to the person sharing the details.

Posted by Vivienne Diane Neal at 1:00 AM 4 comments: