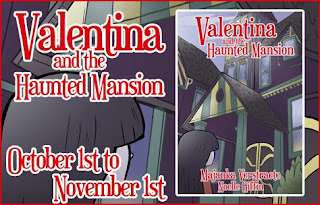 Title: Valentina and the Haunted Mansion

Valentina isn’t thrilled with her parents’ decision to move into an ancient, gigantic mansion in the middle of nowhere—filled with dark, unsettling rooms, and far away from civilization, where they don’t have to worry about hiding who they are. Sure, it may be perfect for a vampire family like hers, but moving here meant leaving her best friends behind.

The new house has some perks, though. Valentina gets to choose her own room, and when she explores the mansion on her own, she discovers a trophy room, a museum room, a music room, and much more.

From the moment Valentina started exploring, however, she’s felt someone watching her. Strange things start to happen all around her: footprints appear in the dust, a disembodied voice sneezes....

...and just because Valentina is a vampire, doesn’t mean she doesn't get scared like any other little girl.

This bedroom was perfect for her—not girly and pink, like most girls would want it, but dark and mysterious. That was more Valentina's style.

"Wow!" She smiled and rushed toward the bed, and did the first thing every kid did when she got a new bed.

She jumped up and down on it.

Majanka Verstraete begged her Mom to teach her how to read while she was still in kindergarten. By the time she finished fifth grade, she had read through the entire children’s section of her hometown library.

She wrote her first story when she was seven years old, and hasn’t stopped writing since. With an imagination that never sleeps, and hundreds of possible book characters screaming for her attention, writing is more than a passion for her.

She writes about all things supernatural for children of all ages. She’s tried to write contemporary novels before, but something paranormal always manages to crawl in.

Majanka is currently studying for her Master of Laws degree, and hopes one day to be able to combine her passions for law and writing. When she’s not writing, reading or studying, she likes watching “The Vampire Diaries” and “Game of Thrones,” spending time with her friends, or playing “World of Warcraft.”

She has a lower grade chapter book, “The Doll Maker” coming out in September 2013. This is the first book in the Weirdville series, a series of scary books for kids. The second and third book will be released in December 2013, along with an audio book for “The Doll Maker”.

Her debut young adult novel, “Fractured”, the first book in the Mirrorland series, will release in September 2013 by InkSpell Publishing. You can now pre-order your copy.

Preorder your copy of Fractured here.

Purchase your copy of Valentina and the here.

Noelle Giffin is an alumna of the Savannah College of Art and Design, equipped with a BFA in Sequential Art. She enjoys a good story and believes that it should always be accompanied by art that complements it, instead of overshadowing it. Her favorite part of creating artwork is working towards that feeling of “being in the zone,” where everything just fits together seamlessly and is difficult to distract from.

She likes to listen to music while she draws and, as a result, comes up with silly music video ideas for her characters. Her medium tends to be digital, but nothing beats drawing with pencil and paper. Lastly, she loves fat little birds like nothing else in the world (and now no one is surprised as to why she’s drawing Bird Brain Books).

Additional Sites to Purchase Your Copy