Get to Know Liz Crowe, Author of Mutual Release 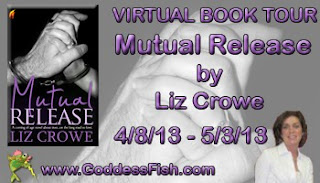 Why Not Real Romance? By Liz Crowe

The Alpha Hero as envisioned by the typical reader is fairly predictable, and is expected to Be a Certain Way by many. He is tall, typically a brunette for some reason, broad shouldered, well-toned, powerful, wealthy beyond reason or explanation, and likely wounded in his soul and seeking a lovely lady to heal him.  I’ve spent some time writing these dudes myself but my guys tend to bring a touch of realism to the equation—one that does not always sit well with traditional romance readers or reviewers.

So, I’m officially calling my style of fiction: Romance. For Real Life. I bring the hot ‘n powerful guys, yes, but I also bring the real life tests of mettle, the hard choices, the mistakes and “the morning after” that must be dealt with.  It is my argument that 90% of the books out there today, be they “young adult,” (or the sneakily named “New Adult” which is a lot of hot romance with a lot of much younger heroes and heroines—also billionaires too a lot of them, but whatever), “chick lit,” “crime and mystery,” “paranormal or sci fi,” or even dare I say “mainstream fiction,” has an element of romance in it. That core story—the oldest one ever—of the attraction between men and women never gets old. Just ask Harlequin.

However, I meld styles, with contemporary, mainstream story elements like challenging family dynamics, tough typical (and not so typical) teenage experiences, hard work environments and small business struggles, personal inner demons and external real life pressures--along with that central, juicy, (dare I use the word) romance. I prefer to read this more complex sort of story, so that is what I write.

This is in no way to disrespect the efforts of any author worth reading in any genre.

On the contrary, it’s an homage to all the varying styles I have personally read (and I’ve read a lot of them), this blending that I do. The familiar jargon “” (Happily Ever After) demanded by the millions of truly fabulous hard core romance readers out there I just turn a little further on its natural axis, reaching for the “WHA” (the What Happens After).  I like to know how the couple really gets on after the hot hookup turns into a heartfelt relationship (if that happens—no guarantee in my books. Just saying).

If you are a fan of the predictable you may find it in my books, but I guarantee my characters are going to work very hard to find it. And will treat it for what it is: “Happily For Now” with promises to work hard as that is what real relationships require. 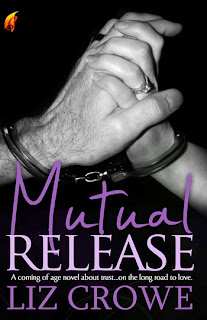 Mutual Release is a coming of age novel about trust...on the long road to love.

Can two dark souls ever make a light?

As president of her own distribution company, Julie Dawson has all she ever wanted -- money, power, and respect. But her carefully crafted façade conceals a torment of abuse and helplessness.  After years remaining emotionally aloof, she is finally independent, but alone. Because she refuses to rely on anyone but herself ever again.

Evan Adams is no stranger to success, or personal demons. The horrific trauma that destroyed his twin sister, and tore his family apart, forced him to craft a new life from the ashes of the old. He's content enough, focusing ahead and not dwelling on his murky past. But something important is missing. He knows what that thing is but refuses to acknowledge it.

Liz will award the following prizes at the end of the Virtual Book Tour and the Book Blast:

1st Prize: Signed set of first 6 books (Includes all books in the series *except for* Mutual Release)

When she isn't sweating inventory and sales figures for the brewery, she can be found writing, editing or sweating promotional efforts for her latest publications.

Her groundbreaking romance subgenre, “Romance for Real Life,” has gained thousands of fans and followers who are interested less in the “” and more in the “WHA” (“What Happens After?”)

Her beer blog a2beerwench.com is nationally recognized for its insider yet outsider views on the craft beer industry. Her books are set in the not-so-common worlds of breweries, on the soccer pitch and in high-powered real estate offices. Don’t ask her for anything “like” a Budweiser or risk painful injury.

Posted by Vivienne Diane Neal at 1:02 AM

Thank you for hosting today.

thanks for having me!

Thanks for hosting Liz on your blog today!!

Cant wait to read this book!! Thx for the awesome giveaway.
lauratroxelatyahoodotcom

Nice that you mix elements in the books