A Chat with Mr. Locario, Renowned Dating and Relationship Coach 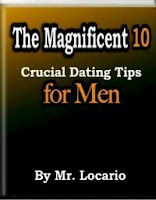 If you are not familiar with Mr. Locario, he is a nationally known dating/relationship coach. He is also the author of several books, including “The Magnificent 10: Crucial Dating Tips for Men,”  “It’s Your Fault You’re Single: Tips on Finding Mr. Right.” and his critically acclaimed book “How to have Sex with 2 Women a Day,” which describes his true-to-life approach in dating many women. Moreover, the book has been adapted into a short film.

Mr. Locario has been featured on Vh1, FUSE, The Dish Network, TLC, ABC Family, The Tyra Banks Show and Anderson Cooper.  He has appeared in Magazines, such as Rolling Stone, Blender, Source, and Vibe, and has written for FlaglerHill and the Fort Green New York Times Blog.

What separates Mr. Locario from other relationship gurus is his no nonsense realistic approach to the dating game and the game of life. The idea is to give men and women the knowledge, truth, and confidence to understand what they want, thus, helping create the best options for themselves in Love and in Life.

His dating advice is accessible through online videos, blogs, and his website www.mrlocario.com. He is also available for individual support and counseling. In addition to his relationship analysis work, Mr. Locario is a rap artist and actor. In 1996, he founded the entertainment company ITAKKS Inc. For the last 14+ years, he has and still performs under the name of “Trends” in , , and .

Thank you for taking the time out of your busy schedule to chat with One World Singles Magazine Blog.

Who or what inspired you to become a dating/relationship coach. I was inspired to become a dating coach because I was a serial dater. I would date so many different women and then I realized that I was really good at talking to women. Also, I’m really passionate about helping other people in their dating lives. I went through so many mistakes and I didn’t want people to go through the same things I went through.

You have written several books on dating/relationships, which came first, the writing or the coaching. The coaching came first. I actually used to coach some of my close friends before I even really considered taking this seriously. Then I started to make videos and write articles and post them up online. I got such a great response from people from all around the world. I would get emails from and . After that I decided to put out my first book called “The Magnificent 10 Crucial Dating Tips for Men” then I wrote my second book which was for women called “It’s Your Fault You’re Single: Tips on finding Mr. Right” and finally my third book “How to Have Sex with 2 Women a Day”

You are also a rap artist and an actor. In fact, one of your books, “How to have Sex with 2 Women a Day,” became a short film. What type of feedback have you received about the book and the film? How to Have Sex with 2 Women a Day the book is basically a “How to” step by step book that teaches men how to step up their game and have more options to have more sex and dates in their dating lives. The feedback has been awesome. The funny thing is I had a lot of women who were mad at me for writing that book. What women don’t realize is that book also helps them out in the long run because when men learn how to talk to women and have more options to be with the type of women they like to be with then they will make better choices if they choose to stick with one girl at the end of the day. Most guys just take what they can get because they have no game. So I always ask women do you want to be with a guy who just settles down with you because he feels like you are the only woman he can get, or do you want a man who knows he can get any woman he wants but decides to stick with you because he knows you’re the right woman for him.

I made the film as a way to promote the book. It has been getting a great response. I had no idea it was going to come out that good. There is actually no written script; it was all improv. I actually had a few celebs hit me up telling me how much they enjoyed the film. I want to make it a full-length feature film soon.

As a dating and relationship coach, what are some of the most valuable lessons you have learned? I learned that you have to be a good listener and you have to be honest.

Are you planning to write any more books in the near future? I have another book coming out for women called “The Magnificent 10 Crucial Dating Tips for Women, and I’m also writing books for teaching men and women how to be successful with online dating.

How can our readers get in touch with you? You can contact me at www.Mrlocario.com or my blog site http://www.ilooksexynaked.com. You can also follow me on twitter at @realmrlocario. If anyone wants private coaching they can contact me at mrlocario@gmail.com