The Bitter Side to Infidelity by Miss Know It All

A couple of years ago, I wrote about a side to infidelity that has been trending for a while. Today, more people in marriages are ‘micro-cheating,’ defined as being emotionally or physically involved with someone outside of the marriage.
The Urban Dictionary defines ‘micro-cheating’ as behaviors considered disloyal within a relationship, nothing too serious but not too innocent either. It can be frequent flirting, touching, calling, texting, chatting, or asking someone for intimate advice, all hidden from your partner. 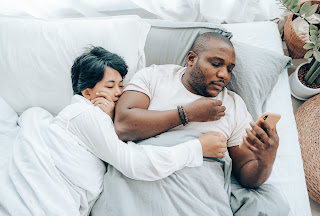 Photo by Ketut Subiyanto from Pexels
However, when it comes to marriage, where there is physical cheating, the signs can be obvious, but as to whether your partner is micro-cheating, the messages may be vague. Moreover, if you decide to stay with that person there is no telling how that marriage will sustain itself. Many experts will recommend marriage counseling. Unfortunately, in countless cases, the damage has been done and no amount of advice will save that marriage.
Just one month after giving birth to their son, a popular talk show host revealed how she discovered her spouse was cheating on her. What tipped her off was a late-night phone call. She overheard her husband talking to another woman, who eventually became pregnant. The host’s husband even purchased an abode for the mistress and their child, but later added that the host and her husband moved on from the incident stronger than before.
In hindsight, the host stated that she never would have believed that someone as successful as she would have stayed with a cheater, and says she does not regret staying with him for over twenty years when enough was enough.
Remaining with a person who has committed infidelity in a marriage is a personal choice. However, as most people, who have faced a betrayal(s) in their marriage, will state, “Once a cheater, always a cheater, and generally, the marriage doesn’t get any better if you decide to remain in that union.”
Posted by Vivienne Diane Neal at 12:00 AM

I agree that staying with a cheater is a personal choice. What happens after that depends on how the married couple do each and every day. Staying strong can be achieved when both of them work for the success of their marriage.