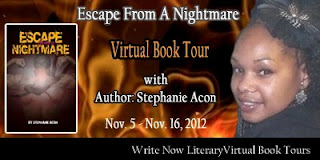 Stephanie Acon has been writing edgy fiction tales and poetry since the age of ten years old. However, it wasn't until the age of 21, when she found Hip-Hop, (or Hip-Hop found her) that subsequently she became known to the underground Hip-Hop world as NinaRaw. For ten years consistent, she rocked with force, and played a vital part on the side of Systematic Muzick Inc. ('The OESC' and 'The Murc Unit'). In the mist of performing, writing, rhyming, recording, selling and shopping mixtapes...amongst the community, somewhere, NinaRaw became hailed and dubbed as the "queen". And not by way of cliché props, but strictly because those saying the title "queen" meant it when they said it, and said it when they felt it necessary.

Escape FROM A NIGHTMARE is her first urban fiction novel. Her inspirations have been drawn from the many experiences she has endured, observed, and inhabited in the streets of .

Ms. Acon, thank for making One World Singles Magazine Blog one your stops on your Virtual Book Tour. We are always delighted to talk with people who have taken that big step in becoming an author and having them share their journey from coming up with a story idea to completing that first novel.

What are some of the most valuable lessons you have learned from writing? To be humble and value not just each sell and opinion from my readers, but most importantly to value the responsibility of planting seeds because as a reader reads the writer is held accountable for every seed planted in the reader(s) mind. That’s big!

What type of characters do you enjoy creating? Real life inspired urban characters representing my generation.

Which authors have influenced you the most? I really haven’t adopted a specific influence so to say. I’m influenced by every author whose book has kept me turning the pages. But I am most-motivated by those who write as realistic as possible…and those who leave a message or a point to it all by the end of their storyline.

Please tell our readers something about yourself. I use to be an underground hiphop artist who was so nice that I could compete with the best male rappers out there. But I have come to learn that just because you can do something does not mean it is your calling. Sometimes your calling is so strong that it spills over into other areas, which is why you seem to be so amazing at it – but still it is not your calling. So with that being said, I have since left behind the dark world of hiphop and the lifestyle surrounding it to take up that which God has gifted me to be since the age of eleven…and that is a WRITER…not a rapper.

Who or what inspired you to become an author. To be honest…no one. As a child, I stood in the mirror and asked God for a talent and he gave me the gift of writing that same hour. He gave me what he wanted to have for a reason and has continually inspired me to press into becoming a great steward of the talent.

Have you ever received a negative comment or review about your book, and if so, how did you handle it? Yes. I had a woman write a review on me that was negative only because she didn’t like me including God into my storylines. This reviewer was really into pointless drug-dealing inspired tales and apparently, when she crossed my book she felt a certain way. She posted her remarks but other reviewers challenged her so I really didn’t have to. I write based on real life scenarios that I’m familiar with. Most readers do not live the exaggerated lifestyles many urban books mimic. I write according to real life and thoughts that many can relate to. I write so that my readers can see themselves in the story, but there will always be opposing forces who simply don’t want to do that. They’d whether go somewhere else overly nuts…but it’s all good.

From where do you get your story ideas? My generation whom I have dubbed the lost generation. Nuff said.

Are your stories based on true current or past events? Everything is based on the truth…only crafted into fiction.

As a writer, what has been your biggest challenge, trials or tribulations that you have overcome? Never giving up. My beginning was not easy. It was and is solely based and bred by faith. My faith is the only reason my dream exists. And faith is the realest and hardest fight one will ever experience.

Are you planning to write any more books in the near future? Absolutely.

What advice would you give someone who is thinking about writing a book? Have a reason why you’re doing it…and please, understand the level of responsibility that you will be taking on by getting inside of the souls of each reader. You will be held accountable for every seed you implant in those minds so just remember that.

How can our readers get in touch with you? My website is currently under construction but will be up very soon. In the meantime, readers can reach me on Facebook tagged Stephanie Nina Acon – and – Twitter@1queen1nina.

What type of comments or feedback have you received about your book(s)? Many and they are varied. However, it’s shocking to me but the most common one comes in the form of …”Oh my God, this is my life!”

What advice would you give an author who receives a negative review on his or her book? Keep your eyes on the prize and the positive. Everyone won’t like or relate to everything and that’s fine. Focus on the ones who do. Get your energy from those people and let the negativity fade into the background. It’s all a part of the game.

Please feel free to add a question that a reader has asked you in the past, and how did you answer that question? Many, many have asked me if this book is based on my life because it seems too real to be fiction. My response is always the same - I tell them yeah…it is…and it’s also based on yours.


Escape From A Nightmare Synopsis:

Have you ever experienced a premonition that you just couldn't shake? A foreboding dream or sign that you deeply wanted to ignore but...your spirit just wouldn't release it? Well meet Gabriana Hilson...

Gabriana is a dreamer in more than one way. She has daydreams of living the good life on her terms, and without compromise. But then, there are the “other” dreams. The very strange and disturbing omens that come while sleeping. They whisper the conflict of everything, and arrange messages that Gabriana doesn't want to hear...or see. Especially the ones about her boyfriend. She wants them to just go away. But they won't. The visions only multiply, and are rapidly distorting her reality, threatening and interrupting the life that she wants so badly to exist. That's a problem.

To Gabriana, Scholar is the king of kings. She is willing to sacrifice it all for him, including family, friends, God, and her sanity. She believes that Scholar is a beautiful dream come-true...but is he really? After signing a record deal as a rapper, Scholar brings Gabriana along for the roller coaster ride of her life. He knows how much she loves him so when the drama begins; he uses his manipulative tactics to hold her in place. He is the ruler of their world, and everything is running the way he has always planned until things go horribly wrong. Suddenly, a well-planned dream quickly turns into the nightmare of all nightmares. Both Scholar and Gabriana learn the hard way to expect the unexpected - for he comes out of the blue. Or does he? He is extremely calculating...and his name is Khali Simone. After meeting him... Gabriana has no idea of the door she opens. Will she discover the truth behind her peculiar premonitions, and make a meditative escape?...Or will Gabriana continue to run until she falls?

Nothing But Books said...

Thanks for featuring Stephanie on her book tour