﻿ ﻿
One World Singles Magazine Blog would like to welcome Akinyi Princess K'Orinda-Yimbo, Author of Bound To Tradition. She was gracious enough to take time out of her busy schedule to allow us to dialogue with her; she will discuss her latest short story, The Proposal, and talk about how she sees the world when it comes to her writings. 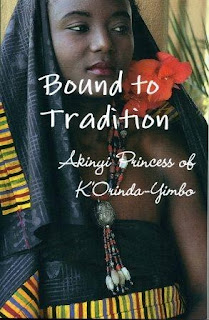 What inspired you to write your first book? Thanks for asking and for the interview. This was a personal and private experience that affected the relationship between me and my husband, so in a way Bound To Tradition is largely autobiographical. My short story, The Proposal, which I culled out of Bound To Tradition has been nominated for the 2012 Cain Prize which will be announced in April 2012.

Is there a message in your novel that you want readers to grasp? That we may look at others outside our culture with cultural spectacles but we should never judge their culture with the same cultural specs. And that cultural bias need not be relegated to one cultural group or one corner of the world – it’s universal.

Do you have any words of wisdom for future authors? Keep on writing because that’s what you live for, cry for and pull out from that place inside you that only you can comprehend. And write what you’re most passionate about, not what is in publishing vogue or just sold for a six figure sum – unless this falls in line with what you’re passionate about.

Why should we buy your book? This is a book that’s unique in itself for the reasons I state above. But even more important, readers have not many authentic writers of continental African books, so that the books normally slip off their radar before they even sense it.

Is there a special place that you prefer when you write? Well, we’ve turned two rooms in the house into offices and mine has a huge French window through which I stare for miles into the dark . It both calms me and gives me ideas. The very best is of course going for a long walk in the forest – alone.

How or when did you become a writer? I don’t remember the exact point in time when I decided to be a writer. From Mum’s belly or so. But I remember the subsequent when and why. I was in my preparatory school in and my English teacher asked the class to write a detective story about a towel missing from one of the dorms. So I said to myself (age 10 or thereabouts), “All right, Watson, let’s get down to work.” I named my detective Skylark Homes. And ended up with red marks and crossings all over my story – for the simple fact that I kept on writing: And the dick asked… The witness told the dick… The thief, after the dick had caught her red-handed… Finally the dick… I thought I was being really creative and so cool, with that diminutive. Not so my English teacher! I soon found out what other meanings are attached to that four-letter word.

What genres do you enjoy writing in? In fiction I’m really fond of the contemporary literary women’s with psychological insights. I’ve just written my first crime / suspense work which is being “handled” at the moment. The African element is always present in all my stories. No, no, I don’t have blonde heroines being bitten by poisonous snakes or catching malaria while trying to teach the Khoi-San of the Kalahari Desert how to utilise the post office. But a lot of my own makeup which is African-European or Western (you can’t escape that sort of nature when you’re placed in an English boarding school at age nine, being groomed into a hybrid English African aristocrat) are endemic in my writing. I’m a child of both cultures, so I’m more into relationships standing the test of cultural clashes. How the couple and their children (who tend to be affected by their being “neither nor” from the earliest stages of their development, especially following contact with the world outside their home) do or don’t overcome their unique problems. Recently, I had such a positive rejection from an editor at Penguin who was kind enough to read four of my works. I thanked the editor for spending all that time reading my stuff, and actually posted this killer rejection on the ’Net and earned a lot of support from some forum members, urging me to keep on reaching for the stars. I’ve thought about the romance genre and actually sent excerpts to Harlequin M&B. They told me to concentrate on the emotional conflict and the steamy bits rather than cultural aspects and their psychological nuances. I suppose I’ll give it a try. Some day soon, hopefully. My non-fiction writing, such as the book Darkest Europe and Africa’s Nightmare: A Critical Observation of Neighbouring Continents, is also inundated with “ and the rest of the world” in terms of history, cultures, modern politics, the women of and socio-economic issues.

Can you tell us how much of the marketing you do for your published works or indeed for yourself as a ‘brand’? This is where I’m most frustrated. I do my best in my website and monthly newsletter, I organise local readings and book-signings. But I’m a techno-ignoramus when it comes to the so-called social media networks. Copy and Paste, that’s me. When I accidentally hit the wrong button and the page suddenly looks alien, I’m out of it. I do have some presence there and my fair share of followers and fans, but one needs to invest so much time in these networks daily because whatever you post has such a short lifespan. Shorter than short. So one has to be a techno geek or hire one – which is an expensive route to take unless your name is Brown, Cornwell, Grisham or McDermid. I also started a couple of blogs but found that I had very little time to take care of them, and that, for a blog, is worse than having none at all. I cringe when I think of how many readers have called me names when they check for new postings for weeks and months and find only the same old same old. My sincere apologies!

As a writer, what has been your biggest challenge, trials or tribulations that you have overcome? I have received negative comments from two of my German readers of Bound To Tradition – KHIRAS TRAUM – which I could well understand. They had chosen the right book but were expecting the wrong literature; they were expecting that wrung dry clichéd of diseases and misery and FMGs and child soldiers, etc. I don’t cater to that. Besides, the German version of my book doesn’t have the last chapter, making the readers miss the “happy end” bit. That’s something readers can’t forgive their author for.

Could you please give us a blur about your present or upcoming book? Golden Helena, twenty-two years old, is a Greek Cypriot endowed with the beauty to launch a thousand punches. A successful marketing executive at the Limassol Palace Hotel, her career is on the rise. Until she meets two cousins, Enrique and Ramón, thirty-three and twenty-nine respectively, from an old Catalonian family. It seems to be love at first sight. But in a triangle. However, has a secret buried deep inside her that she wants to keep away even from herself: When she was five years old, she discovered that her parents, an aristocratic British mother and Greek architectural engineer father, are actually her adoptive parents. They have no idea who her biological parents are because they adopted her from a convent in in 1982 when she was only three days old...

Please feel free to add a question that a reader might ask you, and answer that question. Well, I remember over Christmas 2011, I was invited to read at a Seniorenresidenz (a residence for seniors) as we prefer to call them here in . And there I had up to multi generations of nearly each family present from 7 to 70, all packed in a dance hall to listen to my views. Then a lady stepped up to the mike and asked me if we also have Christmas in (the western world tends to think of as one land, not a continent). I told the gathering that celebrated Christmas since the Copts in and in the 1st century. Christianity is Afro-Orient, not “European”. We had a lovely long discussion ranging from never having ever had a religion that became a world religion to the Lalibela Cross and monolithic churches in . Lots of Aaaahs and Ooooohs. That’s what I meant at the beginning of this interview – the cultural specs we keep on our noses can be hindrances so that we refuse to see what’s right there on that very nose.

Please tell our readers something about yourself. Born on the shores of in Kisumu, the capital city of , , to the Luo royal houses of K’Orinda and Yimbo; then I was sent to a public school in , when I was nine. I’m a graduate journalist  and economist from the London Schools of Journalism and Economics with firsts. I moved to , , where I studied Germanistics and German specific economics. I’ve been writing as a freelance journalist since 1980, columnist with various dailies and monthly magazines in and . I give lectures and seminars in various German universities, colleges and high schools on topics ranging from socio-economy in , Business English, African literature and the socio-ethnological conflicts in the traditions of Africans and Europeans in particular, and the West in general. I’ve written and published articles, papers, books and a novel in German: Khiras Traum. Then came my two novels Bound To Tradition and its sequel The Separation. My non-fiction book “Darkest Europe and ’s Nightmare: A critical Observation of the Neighbour Continents” published in 2008 by a publisher. Bound To Tradition came out in Nov 2010 in the . The AuthorMe.com Group judges have just nominated my work, THE PROPOSAL, and submitted it for the 2012 Caine Prize which will be announced in April 2012 in .  Full CV -  www.akinyi-princess.de. More works as yet unpublished and a children’s fantasy/thriller, crime and romance are in my website at this link http://akinyi-princess.de/326/Home/Book_Order.html I speak seven languages and live in with husband, son and grandson.

Bound To Tradition is on:

Inspiring interview! Thanx a lot for sharing.Id love to get my hands on that book.