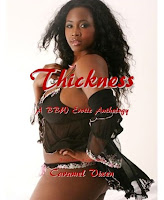 Are you looking for a great read of dreamy sagas and sizzling plots, which features voluptuous divas looking for love and romance? Well look no further.


Tia couldn’t deny the fact that the way he demanded her to give him some always turned her on. She slowly slid down her uniform pants revealing that she didn’t have on any panties.


“Ooh, you wore my favorite underwear”, Dr. Bryant exclaimed. “None”


“I know how you like it papi.” Tia said licking her lips as she watched him unzip his tan silk trousers and let them slide down his legs to the floor. He then took his briefs off in the same manner. Tia was so eager to feel and taste her lover that she pulled his six foot five frame closer and pulled his throbbing dick to her lips and kissed the head as if she was French kissing his lips.


She wasn’t even paying attention, she just assumed that he was preparing to penetrate her with that delicious dick of his. But, what he did next was a pleasant surprise even for her. He then poured hot chocolate sauce on her pussy lips and then took to devouring her as if she would be the last meal he ever had.


“Is that what you want? Say you want it.” Trevor loved to be demanding during sex.


“Say that shit louder then girl. Let everybody know that you want it.”


“I WANT IT TREVOR!” She screamed.


“Then bend over so I can give it to you since that’s what you really want.”


He feverishly drilled his manhood into Tia’s thickness, not even slowing down to fully release his juices in her. He somehow flipped Tia’s big, juicy ass over without breaking the connection his huge dick had with her warm, wet pussy.


All of a sudden the door was opened. In the doorway stood Tia’s loving and devoted husband. He had come to take his precious wife to lunch and all the while she’d been busy being Dr. “Feel Good’s” meal.


With tears of rage in his eyes, he lunged forward and grabbed Trevor’s neck, attempting to strangle the life out of him. Tia was so shocked that she was frozen solid. She couldn’t scream, she couldn’t pull up her pants, she couldn’t move at all. Just as Trevor was slipping out of consciousness, Jonathan looked over at his wife and said, “Since you like to be fucked instead of made love to, then let me fuck you bitch.”


That snapped Tia out of her frozen trance. “What!?! Johnny?” Tia was shocked, pissed, hurt and somehow turned on at the same time.


“I said let me fuck you, if you can handle it, I might not leave your cheating ass.” Jonathan snapped.


“Johnny?” Tia was puzzled. Yet excited, but, she wasn’t ready to show her excitement.


“Come on ho, you know you want it.” Johnny demanded showing a side of him that Tia had never seen before. She couldn’t deny it any longer. She was finally completely turned on by her husband and she liked the feeling. “Get on your knees, Tia.” Jonathan instructed his adulterous wife, whom happily complied. He then forcefully shoved his pulsating dick into Tia’s wet hungry mouth.


Pleasantly surprised by her husband’s new found gumption she couldn’t even question him as she did what she was asked. She suddenly felt a cold, wet tingling sensation as he squirted a huge glob of baby oil gel in her asshole.


He then gently toyed with her anus, to make sure it was properly lubricated and slowly forced his huge tool into her awaiting behind. He pumped her slow and hard, just the way she liked it. It made her wonder why he hadn’t put it down on her like this before, had he, she never would have cheated, she thought. She had the ultimate orgasm just as Trevor came to. She had been so into Jonathan that she had forgotten all about the doctor.


As she pulled her pants back up she looked at the doctor and then looked at her husband and said, “baby, I will never stray again. Let’s go home.” Then she looked at Dr. Bryant and said, “I’m taking the rest of the day off.”


After that day she and the doctor never spoke again. He had shamefully put in his resignation and left town.

Thank you for hosting me on your awesome site!!