Give The Gift of Books on Valentine’s Day

Are you stumped on what to buy that special person for Saint Valentine’s Day? Are you tired of giving lingerie, flowers, chocolate or jewelry, yet again? Why not consider giving book(s) with a twist of romance, lust, deception, scandal and revenge. Following are some of the most tantalizing books that will definitely kick start a day of passion, intimacy and desire.

Shanna Stiles hasn't been a virgin for years, but it's still her dream to have a white wedding. Her dream becomes a nightmare when, just before she walks down the aisle, her fiancé is seen kissing his best man.

She runs away from her life, and a chance encounter with the gorgeous, successful Ross Marshall leads to a week of passion and a connection neither of them expected. Ross is determined to have a future with Shanna, but someone out there won't let it happen. Shanna returns home and soon discovers disturbing secrets about the people she trusts.

With so much stacked against her, she looks to Ross for protection and comfort, and it turns out he may be exactly what she needs--except the man she left at the altar isn't giving her up without a fight.

Ain’t nothing sweeter than the forbidden. Her name is Buttercup. And he’ll kill them all before he’ll let her go...

It is the 1930s, the era of Al Capone, John Dillinger, Baby Face Nelson, Ma Barker, and Bonnie and Clyde. When gangsters, bootleggers, bank robbers and racketeers ruled the night and the law. Amongst them, a young bank outlaw is blazing his way to infamy. He’s known as Silvio ‘Bloodshot’ Garelli. Bitter over the untimely death of his childhood friend and his wrongful incarceration, Silvio, now again on the outside, is determined to live his life by the gun. But his love for a colored hooch dancer at a carnival haunts him with painful memories that keep him seeking answers.

Her name is Buttercup. Born and raised in a dustbowl carnival by a midget named Tiny and a fading beauty ex-Vaudeville dancer, she’s got a secret. Fate intervenes. Silvio and his band of brothers stumble upon a rural country town—and Buttercup’s carnival. She fears he wants revenge for all he’s lost due to their brief love affair. But what he wants will ignite passions, and fury, beyond either of their imaginings. And when the dust settles, so does the matter of love between them. 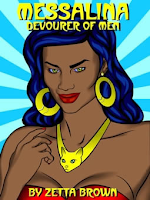 When life imitates art...expect to be framed. Eva Cavell is a woman with an embarrassing secret. She is sexually frustrated and believes her size and race intimidates men. In an attempt to relieve her sexual tension, every Thursday she goes to a local movie theater and allows strangers to fondle her in the dark. During one of her escapades she meets renowned artist, Jared Delaney, a smooth Southern gentleman with irresistible violet eyes. He has been watching Eva on her weekly visits and sees through her icy defence straight to the hot passion burning underneath. But Eva has an image to uphold as a tenure-track instructor at a private Denver college and as the youngest child of a prominent black family. Will she ever be able to live her life how she wants and without shame? In order to do so, she has to own up to her own choices in life.

Buy Link: Logical-Lust Publications  - Available also at Amazon.com, All Romance e-Books, and many other online retailers

Summer is forced to go to a Valentine’s Day party with her boss. She’s reluctant because this is a day for lovers and she doesn’t have a lover and hasn’t for a long time. At the party she meets the charming Peter Cook and he takes an instant shine to Summer leading her down a path of sensuality that she follows without thinking twice. When their time together comes to an end she worries that she’ll be fired for ducking her boss to be with Peter. Will she be able to save her job and have Peter too when the party is all said and done?

Time is on their side and they can be together, assuming the truth doesn't ruin everything first.

Immortals born in the thirteenth century, Lucien Riordan and Ranulf Styr have waited centuries to be reunited with their love. Want for her cemented their friendship through time even as it tore it apart. She changed their lives, made them want better, and they plan to show her that. There’s only one catch—she’s never met them before.

Eris Brue is flattered by Lucien and Ranulf’s attention but they are her bosses. She doesn’t want to get tangled up in an office romance, especially not with two men. Their joint seduction overcomes her resolve and she gives in even though she knows they are keeping secrets that could doom their relationship.

Centuries of planning have finally come to fruition. Lucien and Ranulf have a short amount of time to make Eris love them, because once time has her, everything could come to an end.

Maya is a half human, half merman who has decided to attend the fertility-virility rite and learn more about her merman heritage. The rite is meant to help mermen find their perfect mates, but Maya is only interested in using it as research.

Tam and Kessen are participants who are searching for their third. They are drawn to Maya and she to them. But, she refuses to acknowledge the bond and runs. Tam and Kessen must pursue her through her dreams if they hope to make their love a reality and prove they are the right men for Maya.

Valentine’s Day – It’s the most romantic evening of the year and Kara and Ron are planning to celebrate it right: the ballet, a romantic dinner, capped with a very special night in an expensive hotel suite. At least, that’s what they were planning before Kara’s sister calls desperately needing someone to replace her sick babysitter while she and her husband spend the long Valentine’s Day weekend in Jamaica. Suddenly Kara is exchanging roses for afternoon cartoons, the ballet for kids racing around the house, and a night with the man she loves for a long weekend snowed in at her sister’s home in suburbia. Can anything restore the fun and romance to this Snowbound Valentine’s Day?

NOT ANOTHER DATELESS VALENTINE'S DAY by Veronica Tower

It was happening again!

February was here and Kathy still didn’t have a date for Valentine’s Day. What was wrong with these guys? Kathy was sexy and fun, but no one ever noticed that come February. No, it was always some other woman who got the flowers sent to her office, the chocolates delivered to her desk, or that special piece of jewelry presented at the restaurant. And it was definitely always some other woman who got swept off her feet and taken home for a night of incredible, mind-blowing passion.

This year Kathy wanted in on the magic and she was pulling out all of the stops to make it happen. Slinky dresses, spiked shoes, alluring perfume, she’d do whatever it took to get the right man’s attention. This year, come February 14th, Kathy wouldn’t be the one sitting at home. Whatever it took this would not be another dateless Valentine’s Day.

Passion, Love and Romance Can be Shattered by Deception and Betrayal.

An anthology of five fictional short stories, focusing on men and women who will stop at nothing to get what they want. If it means disguising themselves as benevolent individuals and destroying lives along the way, they are up for the thrill. They will use romance, lust, greed, manipulation and deceit as preludes to suck unsuspecting people out of their nest egg. Some of the characters are ruthless and as well as amusing. Paradise Baptiste, a loner, wanted to have it all, at any cost and was going to fulfill her dreams at someone else’s expense. Tiana Bates was a successful realtor who bit off more than she could chew and would end up losing it all. Harry Goto, thought he was the world’s smartest con artist and above reproach, but fate was about to deal him a cruel hand. Faith Bell, a fashion designer and business owner fell in love with an attorney. For her it was love at first sight, but he had other ideas and would put together a plot that would destroy her company. Serenity Jones, thought she met the love of her life, but her dreams were about to become a nightmare on duplicity road. Which characters will end up having it all and living happily ever after or sadly ever after?