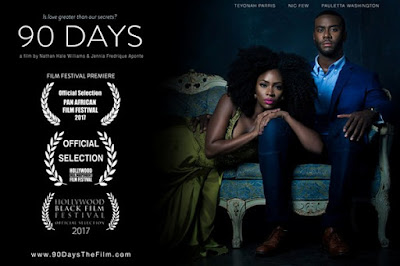 The award-winning film, 90 Days is now available for download at https://www.90daysthefilm.com. You now own it or rent it.

90 DAYS stars Teyonah Parris, Nic Few and Pauletta Washington and deals with HIV disclosure, dating and the power of knowing your status. It was written by Nathan Hale Williams and directed by Williams and Jennia Fredrique Aponte.

90 DAYS has screened at over 30 top-tier film festivals, community screenings and has won multiple awards, including the African Movie Academy Award, the Pan African Film Festival Visionary Award, the Grand Jury Prize at the Hollywood Film Festival and it was the Overall Winner at the Diversity in Cannes Short Film Showcase, to name a few.

It has been the goal of the filmmakers to make the film available to as wide an audience as possible to use as an entertaining tool to have the much-needed dialogue about HIV/AIDS in the Black community. However, the film has touched a wide range of audiences around the world and has a message for everyone.

DOWNLOAD THE FILM!
GET TESTED!
KNOW YOUR STATUS!
HAVE THE CONVERSATION!

Together, we are greater than HIV/AIDS.
Posted by Vivienne Diane Neal at 12:00 AM