From the Author of All of Me, Comes GUILTY of LOVE by Stella Eromonsere-Ajanaku

~ One blazing look…fuels his desire ~ 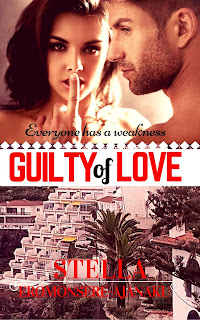 Taking a quick break from his search for the man who put his dad behind bars, Adam meets a curvy, dark-haired, intelligent beauty with a lovely sense of humour. She sets his body on fire and shakes him to his core. He longs for her and will move mountains to be by her side. But when he finds out the family responsible for wrecking his dad’s life, his heart is at war with his head as the identity of the woman he is up against throws him into a dilemma.

Letitia wants to get back at the man who made her family suffer. She will do anything to see the man return to jail. A quick stopover on holiday brings her across a hot, sculpted and protective bloke who stirs something deep within her and leaves her body and soul aching with a sharp need. When she eventually confronts her enemy, recognition dawns and every locked-up emotion comes crashing down.

Will Letitia and Adam be found Guilty of Love?

“Did I scare you?” Adam joked from behind Letitia while they both kicked out their legs softly to keep afloat in the swimming pool.

She shook her head to dislodge water from her ears. “Not really. I wondered who had the nerve to hold me from behind.”

Swirling around to face him, she watched him flick both hands over his wet hair and his eyes grinned at her.

“How old are you?” he mouthed just as two men raced past doing the front crawl with their arms under water.

Lifting her hands out of the water, she pushed her hair out of her face. “All of twenty-nine.”

Floating closer to where she was, he chuckled. “You don’t look a day older than twenty-three.”

Even though she knew he was being a gentleman, she giggled as warmth crept up her neck.

It felt good to receive such glowing compliment from a man who wanted nothing from her. He hardly knew her.

“Thank you. I feel twenty-nine for sure.”

“What does that even mean?” His lips formed into a wide grin as if he had no clue what she meant.

Three young men swam past, but one of them winked at her as he lifted his head to take in air.

Adam had his back to them, so he did not notice.

And she tried not to grin. “You know, like I don’t feel the same as I did when I was fifteen. And you, how old do you feel?”

With one arm, he circled her waist and he led her to the pool edge. “Swimming here with you now I feel like I’m eighteen again. But I’m only thirty-five.”

He hauled himself to sit on the poolside.

“Come and sit beside me,” he told her giving her his hand to help her up the side of the pool.

She took his hand and she joined him on the cool tiles. “I would not have guessed your age. I thought you were under thirty.”

For her accolade, he caressed her shoulders with two fingers and made his way toward her neck. She skewed her head as she burst out giggling.

Already, sweet tickles dripped from his fingers through her cleavage with far too much speed.

Feeling self-conscious at his closeness, she tightened the rope of her bikini top and bottom when she stopped laughing.

“It feels good to hear you say that, Letitia. Are you dating actively at the moment?”

For several seconds she stared at him wide-eyed. Adam’s gaze was relentless as he waited for her reply.

“I’m keeping that close to my chest.” She got a kick out of needling him since she just found out he had man-sized jealous bones in his sculpted body.

“Don’t make me crawl through your chest in search of my answer.” The words spoken gruffly carried an underlying threat.

Unable to contain her shock, her eyes sparkled with excitement. “Not in front of everyone, you wouldn’t, Adam.”

When he leaned forward, his eyes assured her he intended to carry out his threat, so she promptly changed her response.
“Okay. I’m dating.”

No emotion flashed through his face as he asked. “Are you seeing someone in particular?”

A Bit About Stella

I'm Stella Eromonsere-Ajanaku, author of several toe-curling & heart-fluttering Flirty & Feisty Romance Novels consisting of Contemporary/Interracial/ Multicultural Romance as well as Historical & Paranormal Romance Books. I write about super sexy heroes and flirty & feisty heroines. My stories are a breath of fresh air, dotted with unexpected twists and are set in fascinating , enticing and enchanting . An emotional spin is what you get when you read my books. GUILTY of LOVE is my hot new release and it makes the perfect gift for your family, friends and colleagues.

There are now 21 published books so far. Just so you know, I'm a romantic freak, mother of two fun - loving teenagers, married to my gorgeous husband and best friend and we live in . If my teens had their way, they would fill our home with a dozen pets. Swimming on my back like a star-fish is one of my skills. Please write or connect with me on social media. I love reading from you.

Connect with Stella on Social Media 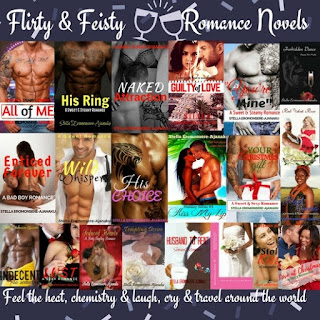 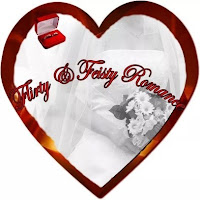 Our promise...is to deliver an intensely emotional experience you'll never forget.
Posted by Vivienne Diane Neal at 12:00 AM