“Miracle Man” was named by Amazon as one of the Top 100 Novels of 2015 and one of Amazon’s Top 10 Thrillers for 2015.  It’s been an Amazon Best Seller, and a winner of a national Best Thriller award, with almost 650 Amazon reviews with a 4.3 overall rating. 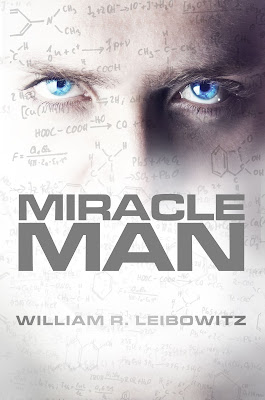 The victim of an unspeakable crime, an infant rises to become a new type of superhero.  Unlike any that have come before him, he is not a fanciful creation of animators, he is real.
So begins the saga of Robert James Austin, the greatest genius in human history.  But where did his extraordinary intelligence come from?
As agents of corporate greed vie with rabid anti-Western radicals to destroy him, an obsessive government leader launches a bizarre covert mission to exploit his intellect.  Yet ’s greatest fear is not of this world.
Aided by two exceptional women, one of whom will become his unlikely lover, struggles against abandonment and betrayal.  But the forces that oppose him are more powerful than even he can understand.

A tall figure wearing a black-hooded slicker walked quickly through the night carrying a large garbage bag. His pale face was wet with rain. He had picked a deserted part of town. Old warehouse buildings were being gutted so they could be converted into apartments for non-existent buyers. There were no stores, no restaurants and no people.
“Who’d wanna live in this shit place?” he muttered to himself. Even the nice neighborhoods of this dismal city had more “For Sale” signs than you could count.
He was disgusted with himself and disgusted with her, but they were too young to be burdened. Life was already hard enough. He shook his head incredulously. She had been so damn sexy, funny, full of life. Why the hell couldn’t she leave well enough alone? She should have had some control.
He wanted to scream-out down the ugly street, “It’s her fucking fault that I’m in the rain in this crap neighborhood trying to evade the police.”
But he knew he hadn’t tried to slow her down either. He kept giving her the drugs and she kept getting kinkier and kinkier and more dependent on him and that’s how he liked it. She was adventurous and creative beyond her years. Freaky and bizarre. He had been enthralled, amazed. The higher she got, the wilder she was. Nothing was out of bounds. Everything was in the game.
And so, they went farther and farther out there. Together. With the help of the chemicals. They were co-conspirators, co-sponsors of their mutual dissipation. How far they had traveled without ever leaving their cruddy little city. They were so far ahead of all the other kids.
He squinted, and his mind reeled. He tried to remember in what month of their senior year in high school the drugs became more important to her than he was. And in what month did her face start looking so tired, her complexion prefacing the ravages to follow, her breath becoming foul as her teeth and gums deteriorated. And in what month did her need for the drugs outstrip his and her cash resources.
He stopped walking and raised his hooded head to the sky so that the rain would pelt him full-on in the face. He was hoping that somehow this would make him feel absolved. It didn’t. He shuddered as he clutched the shiny black bag, the increasingly cold wet wind blowing hard against him. He didn’t even want to try to figure out how many guys she had sex with for the drugs.
The puddle-ridden deserted street had three large dumpsters on it. One was almost empty. It seemed huge and metallic and didn’t appeal to him. The second was two-thirds full. He peered into it, but was repulsed by the odor, and he was pretty sure he saw the quick moving figures of rodents foraging in the mess. The third was piled above the brim with construction debris.
Holding the plastic bag, he climbed up on the rusty lip of the third dumpster. Stretching forward, he placed the bag on top of some large garbage bags which were just a few feet inside of the dumpster’s rim. As he climbed down, his body looked bent and crooked and his face was ashen. Tears streamed down his cheeks and bounced off his hands. He barely could annunciate, “Please forgive me,” as he shuffled away, head bowed and snot dripping from his nose.

William wrote Miracle Man because of its humanistic and spiritual messages and because he feels that in our current times--when meritless celebrity has eclipsed accomplishment and the only heroes are those based on comic books, the world needs a real hero--and that, of course, is Robert James Austin, the protagonist in