The beautiful Bliss Fenton won't be winning any awards for Mother of the Year. Truth is, motherhood isn't nearly as important to Bliss as the cottage industry she's created: extorting wealthy men solely for the hefty child support she can collect. But Bliss' greed ultimately goes too far when she takes on Fletcher McClain. The handsome record industry mogul insists there's no way he's the father of Bliss' third child. But when the results of the paternity test are finally revealed, a stunned McClain refuses to take them lying down. He hires accomplished attorney Vernetta Henderson to sue Bliss for fraud.

When an unscrupulous attorney from Vernetta’s past reappears to represent Bliss, Vernetta's faithful sidekick Special steps in to join the fight. While Special is hard at work digging up dirt on Bliss, she’s distracted by an investigation of a more personal nature, one that ends up challenging her prejudices as well as her heart.

As Vernetta goes head to head against her corrupt opponent, the stakes get higher and higher and in a flash, the lawsuit goes from contentious to outright deadly.

"Pamela Samuels Young has crafted a page-turner that will keep you engrossed until the very last page. If you're a fan of smart legal thrillers with brisk pacing, crackling dialogue and edgy, intriguing characters, Lawful Deception is for you." 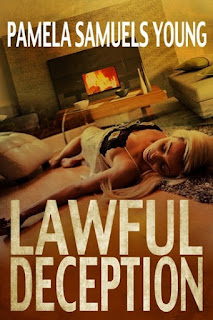 Bliss Fenton took a sip of champagne as she glared across the room at the obnoxiously happy couple. They indeed made a striking pair. Their slim, toned bodies draped in designer wear and expensive jewelry. So trendy. So chic. Setting her champagne glass on the tray of a passing waiter, Bliss snaked her way through the crowd, hoping to get a better view. As she moved, her blonde curls bounced as if lifted by a cool breeze. At 5'8" and 120 pounds, her delicate frame was all slopes and curves. A body specifically designed for exhibition.

The partygoers were packed like human matchsticks inside the gaudy Hollywood Hills mansion. The home, if you could call it that, was a testament to excess. Just like the couple. Too much of everything. Too many art deco chairs, too much bronze and glass, and so much artwork the walls could barely breathe.

Only a few feet away from the couple now, Bliss found herself shoulder-to-shoulder with a too-tanned man with greasy hair. He winked at her. She sneered back at him and moved on. A devious smile fractured Bliss' face as she returned her attention to the couple. She imagined the angst they would experience the minute they spotted her among the partygoers. Fletcher's lips would contort into an ugly grimace, but then coolly transition to a barely perceptible smirk. He was not the kind of man who was easily rankled. That was the reason he was a millionaire several times over.

Mia, however, would not be able to hide her emotions. Fletcher's prissy little black princess would toss Bliss a snarl that bellowed, What the hell are you doing here? It was Mia she wanted to punish most. Bliss had pleaded with God to curse her former friend with a pain ten times more intense than her own. She wanted Mia to live it. Breathe it. Curl up in bed with it. Just as she had. Bliss refused to blame Fletcher for the poor choices he'd made. He was a man. And men, by nature, were weak. Still, he too would pay just the same. The call of vengeance tugged hard at Bliss' soul, urging her, daring her, to march right up to the couple and confront them. But she held back. For the moment. Patience had always been her most virtuous trait.

Fletcher hustled to the front of the room and began singing the praises of the newest songstress to be added to his stable of artists, LaReena Jarreau. Bliss remembered cuddling in bed with Fletcher and listening to him brag about creating her stage name, since Janice Harris had no pizzazz.

"The first time I heard her voice," Fletcher said, throwing his arm around the bony twenty-something dressed in hooker gear, "I knew she was going to hit the music world by storm. You have to agree that what we heard tonight was-as the youngsters say-off the chain."

Everyone applauded as the hip, dark-haired CEO of Karma Entertainment grinned, happy to be on show. The only thing Fletcher enjoyed more than being rich was having everyone know it.

Mia remained off to the side, perfecting the look of the coy, supportive fiancée. That had been Bliss' mistake. Accepting her at face value. While Mia's visual package was quite alluring-all charm and beauty-on the inside, she was pure evil. Truth be told, Mia wasn't all that different from her. Bliss Fenton, not Mia Richardson, should have been on the arm of the music industry mogul tonight. It had never occurred to Bliss that her long-time yoga buddy could walk into a party and take her new guy's breath away. Literally.

At the time, Bliss had been dating Fletcher for a short six months. She'd invited Mia to the party at Fletcher's home for the sole purpose of showing off her new man to her smart, uppity faux-friend. Bliss could still remember Mia waving as she glided into the party, the crowd parting so effortlessly it almost seemed choreographed.

Seconds before, Fletcher had been talking nonstop about his label's next release, but the sight of Mia had caused him to lose his train of thought. When Bliss had formally introduced them, the lust in Fletcher's eyes further telegraphed the gravity of her mistake.

Only days after the party, Bliss' time with Fletcher began to dwindle, explained away by late night meetings that couldn't be avoided or last-minute business trips to. Mia, too, had started cancelling their after-yoga coffee chats and finally stopped coming to yoga class altogether.

It was a month later, when Bliss saw Fletcher and Mia pictured together in Billboard, that she first learned of their betrayal. Her subsequent rage-filled calls to both of them had been ignored. And now, Mia was at Fletcher's side, while Bliss had been pushed right out of his life.

A burst of applause snapped Bliss back to the present. As Fletcher seemed to be wrapping up his speech, Bliss moved closer, stopping inches behind Mia. She leaned in, her lips almost grazing Mia's right ear.

"Congratulations on your engagement."

Mia's head whipped around, her dark brown skin now ashen gray. "You ... you shouldn't be here."

Bliss spoke in a firm whisper. "Neither should you. You backstabbing b^itch."

Mia took a step back. "This is not the place to make a scene."

"Okay, then," Bliss said, moving into the space Mia had abandoned. "Shall we step outside?"

A second later, Fletcher wedged himself between them. "You walk yourself out of here right now," he said through clenched teeth, "or I'll have security carry you out."

Although no voices had been raised, all heads turned in their direction. Mia didn't move.

Fletcher, always cognizant of appearances, wore a stiff smile as he spat into Bliss' face. "If you don't leave, I swear I'll have you arrested."

After three long beats, Bliss winked. "You'll both be hearing from me."

Bliss couldn't help smiling as she sashayed through the buzzing crowd.

Fletcher and Mia would suffer for their disloyalty. Bliss only wished she could be there to see their stunned faces when they learned what she had done and realized there was absolutely nothing they could do about it.

© 2015 All rights reserved. Book excerpt reprinted by permission of the author, Pamela Samuels Young. Do not reproduce, copy or use without the author's written permission. This excerpt is used for promotional purposes only.

When attorney Pamela Samuels Young, a NAACP Image Award winner, isn't fulfilling her duties as legal counsel for a major corporation in , you can usually find her penning her next legal thriller.

Her acclaimed novel, Anybody's Daughter, is what garnered Pamela her first NAACP Image Award win in the category of Outstanding Literary Work (Fiction).

Fed up with never seeing people of color, especially women, depicted as savvy, hot-shot attorneys in the legal thrillers she read, the Compton, CA, native decided to create her own. Despite the demands of a busy legal career, Pamela accomplished her ambitious goal by getting up at to write before work, dedicated her weekends to writing and even spent a large portion of her vacations glued to her laptop. In doing so, she discovered her passion for writing.

A graduate of UC Berkeley's , Pamela has a bachelor's degree in journalism from USC and a Master's Degree in broadcasting from 's Medill School of Journalism. She formerly served on the Board of Directors of the chapter of Mystery Writers of America and is a diehard member of Sisters in Crime-L.A., an organization dedicated to the advancement of women mystery writers.

She lives in and attends Hope in . Visit her Website to see the more than 380 book clubs she has visited and to follow her online:

Pamela is also a frequent speaker on the topics of writing fiction, discrimination law and pursuing your passion. Pamela loves to hear from readers, so use one of the avenues listed below to reach out to her.