Vook - An Established Leader In Publishing Content For Tablets, Smartphones And E-Readers Builds On Its Momentum For 2011

Vook is the leading mixed-media digital publisher that lights up the world's content and connects people around stories and ideas they love. A Vook unites words, videos, pictures and interactivity into new media experiences that allow users to engage with content the way they want. Vook publishes titles in a variety of genres, including lifestyle, business, entertainment, cooking, fiction and sports, working with authors such as Seth Godin, Deepak Chopra, Anne Rice, Gary Vaynerchuk, Slash of Guns N'Roses and Karen Armstrong. Vook partners with industry leaders including Simon and Schuster, Penguin Group, Harvard Business Press, Harper Collins and Hachette Filipacchi. Vook is based in Alameda, CA with offices in New York.


In 2010, Vook established itself as the leader in enhanced digital publishing by helping publishers, authors, and media companies re-create, distribute, and monetize their existing content in a new form. “We are very enthusiastic about Vook,” said Richard Harroch, Managing Director at VantagePoint Venture Partners, in San Bruno, California. “The opportunity is big in digital publishing and the Vook team is a leader in this new world.”


The company has formed strategic relationships with many of the leading book publishers and literary agents, and published Vooks with bestselling authors, including Deepak Chopra, Seth Godin, Tom Peters, Stephen Covey and Anne Rice. Recently, the company released JFK: 50 Days, a bestselling Vook for the iPad that features content created in partnership with Perseus Books and NBC Universal.


Vook has also launched its own digital e-book imprint, which will deliver as many as 500 ‘how to’ and educational titles to the market in 2011. Vook was recently profiled in The New York Times Magazine, which described the company’s products as “fantastic.”
Given their passion for dating, Vook recently released a new videobook called Meet the Man of Your Dreams.


To Publish a Vook: 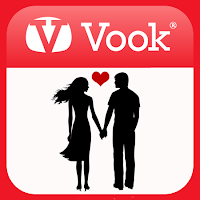