This Author Loves to Create Her Own Fictional Characters 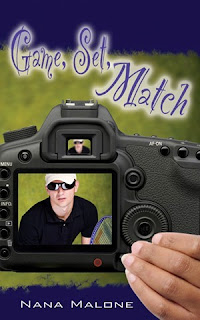 About The Book
Off the court, tennis star Jason Cartwright’s playboy image is taking a public beating. On the court, he’s down forty-love. A knee injury is shutting down his game, and the paparazzi are splashing his love life on every magazine. A comeback is in order, but the makeover he needs to save his faltering career is in the hands of the woman he loved and left fifteen years ago.
While single-mom, Izzy Connors, sees people for who they really are through the lens of her camera, even without it, she knows Jason isn’t the star he appears to be. Although his charm and good looks haven’t dimmed since he broke her heart, all she sees is his wasted talent and playboy lifestyle.
Can Izzy put the past behind her and help Jason get his game, and his image, back on track? Or will the click of her camera shatter his world as well as his heart?
About the Author
Nana’s love of all things romance and adventure started with a tattered romantic suspense she borrowed from her cousin on a sultry summer afternoon in Ghana at a precocious thirteen. She’s been in love with kick butt heroines ever since. With her overactive imagination, and channeling her inner Buffy, it was only a matter a time before she started creating her own characters. Waiting for her chance at a job as a ninja assassin, Nana, meantime works out her drama, passion and sass with fictional characters every bit as sassy and kick butt as she thinks she is. Though, until that ninja job comes through, you’ll find her acting out scenes for hubby and puppy while catching up on her favorite reality television shows in sunny San Diego.

We are looking for great blogs and we would love it if you registered yours with us.

PostZoom is a directory of the best blog posts which helps readers find great blog posts and blog owners drive more traffic to their blog.

If you are interested in joining, please visit http://postzoom.com/register.aspx (yes, it’s completely free).